There is love story behind the nectar of the gods, second most expensive spice after saffron. According to the legend, in El Tajin, Mexico, Tenitzli and his wife were blessed with a daughter so incredibly beautiful that they couldn’t bear the thought of giving her away in marriage to a mere mortal. They dedicated her life as a pious offering to the cult of Tonoacayohua, the goddess of crops and subsistence, a powerful goddess who affected their very life and survival. Their daughter, Princess Xanath, devoted her time at the temple, bringing offerings of foods and flowers to the goddess.

One day, Xanath was going to deposit an offering on the statue of Chac-Mool (the divine messenger), when she noticed a lovely tune coming from behind an inner courtyard in the ceremonial centre. She peered through the door and saw a young man, whistling to himself. It was a handsome and strong young fellow called Tzarahuin. Xanath loved music, and soon they were exchanging tunes, and songs and laughter. Love at first flourished between them. The young lovers tried to meet as often as possible.

Their love grew and matured although Xanath was a noblewoman, and Tzarahuin was not. He was not a warrior, not a prince, not a priest nor a wealthy merchant; he was an only an artist. But, what an artist! He played music, particularly wind conches, the magical instruments with which to summon people to the ceremonies. He was also a painter. He did decorations for the temple. He had been sent as a young lad to the school in the temple, where the teachers soon discovered his ability for the arts and soon he was allowed to be part of a troupe of artist craftsmen who painted an decorated the hundreds of niches in the ceremonial centre.

One day, as Xanath was rushing to meet Tzarahuin, the fat god of Happiness cast his eye on the young girl. His eyes followed her as she ran through the ceremonial centre. He admired the fragility of her frame, and the agility of her movements. She combined both frailty and innocence, with strength and determination. The more he saw of her, the more he wanted her. His eyes followed her everywhere, all the time. Twice, he approached her and tried to speak to her, but she ran away, frightened that the god of Happiness would wish to speak to a humble Totonac girl. The god however, was not to be dissuaded easily and tried one third time to approach Xanath. This time, the girl stayed and listened to what the god had to tell her.

Xanath listened carefully and after the god of Happiness confessed his love for her, she sadly told him that she could not marry him, because her heart already belonged to another one. The god of Happiness was angry that a simple Totonac girl would refuse him and he decided to take matters into his own hands. He went to visit the girl’s father. He shared the secrets that were only known to the gods, and the wealth and prestige of Xanath’s father increased greatly. Soon, after this, Xanath was ordered by her father to marry the god of Happiness. However, Xanath, full of inner strength defied both her father and the god of Happiness. She refused to leave Tzarahuin. In total rage, the god of Happiness transformed Xanath into a feeble, delicate plant, with lovely white flowers and an intoxicating smell. When Tzarahuin found out what had happened to Xanath, he took his own life, at the foot of the plant.

The legend tells us, however, that he comes back every spring in the form of a humble melipona bee and spends hours tenderly circling around the petals of the vanilla flower, making love to his Xanath.

Initial attempts to cultivate vanilla outside Mexico and Central America did not work because of this relationship between vanilla orchid and its natural pollinator, melipona bee. Xanath needed her eternal love, Tzarahuin. Later, however, it is discovered that it can be hand pollinated, but it was never the same without the kiss of melipona bee. 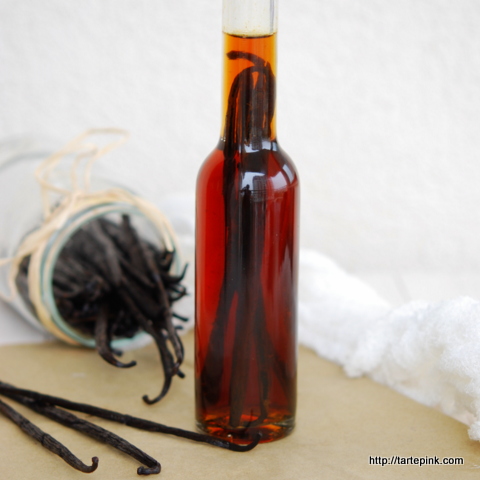 Why on earth does one make vanilla extract at home? Here is why:

1- It is cheaper.
2- It is tastier and healthier to make your own because most of the brands out there are just flavored and sweetened, most of them do not use pure vanillas.
3- It makes a great gourmet gift, especially around this time of the year. [You do not have to wait for the whole process, just gift it and make them wait

According to Pierre Herme the best is Tahitian beans. But they are rare and expensive. He says Mexican variety is also good. These two have stronger and more distinctively floral fragrance compared to Bourbon or Madagascar kind. No matter which kind you choose, beans should be plump, moist, pliable and fragrant. 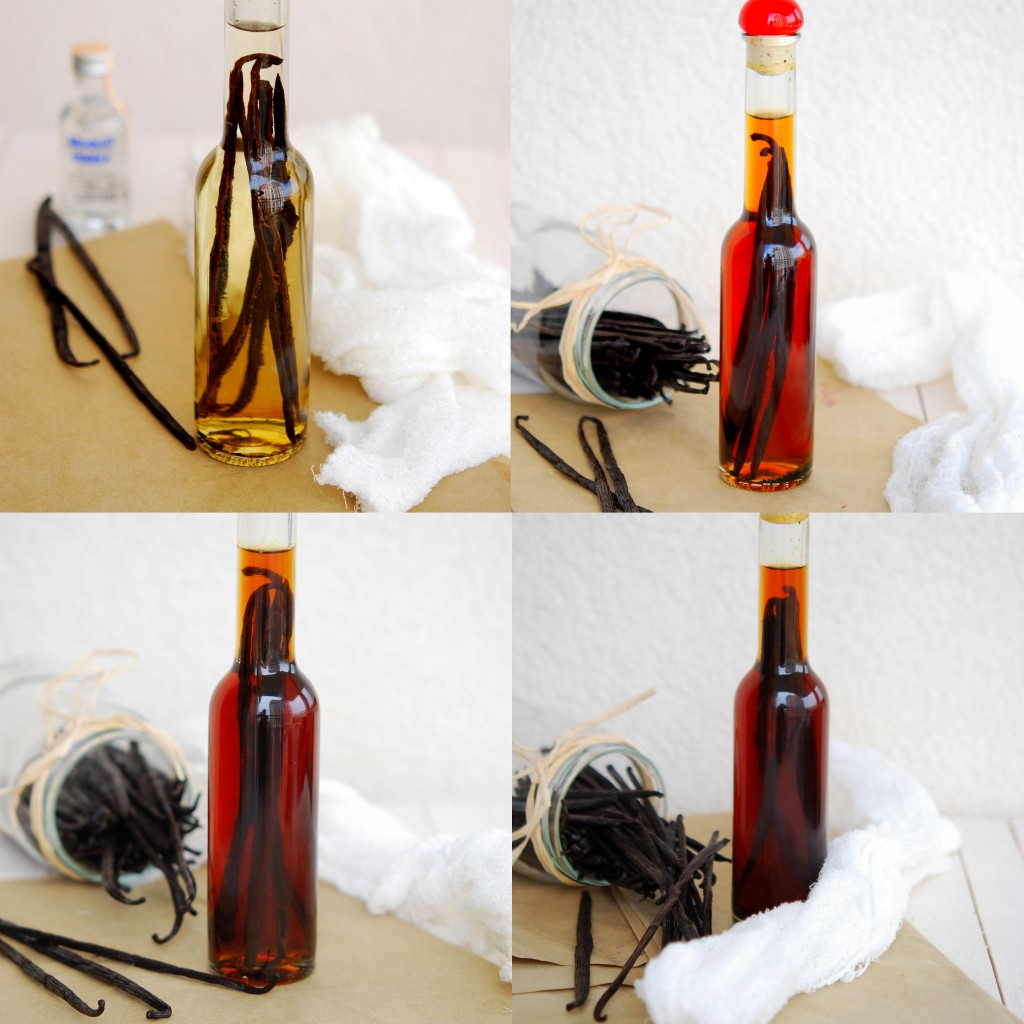 First month of the vanilla extract process--getting darker and darker.

1. Split each vanilla in half to expose the vanilla seeds.

2. Put them in a glass jar or bottle with a tight fitting lid, preferably dark colored bottle so that sun light does not damage the oil in the seeds.

4. Tightly close, give it a good shake and place in a dark place for at least 2 months preferably 4-6 months.

5. Every once in a while give it a good shake.

6. You can keep it forever, just add vodka and beans as you use it.

Fried Calamari
This entry was posted in Condiments, sauce, etc. Bookmark the permalink.